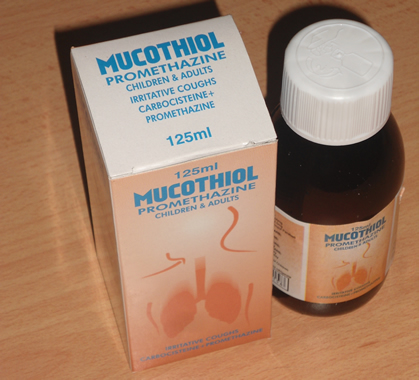 Carbocisteine (S-carboxymethyl L-cysteine) has been shown in normal and bronchitic animal models to affect the nature and amount of mucus glycoprotein which is secreted by the respiratory tract. Studies in humans have demonstrated that carbocisteine reduces goblet cell hyperplasia. Carbocisteine can therefore be demonstrated to have a role in the management of disorders characterised by abnormal mucus.

Carbocisteine is rapidly absorbed from the GI tract. Promethazine is distributed widely in the body. It enters the brain and crosses the placenta. Promethazine is slowly excreted via urine and bile. Phenothiazines pass into the milk at low concentrations.

Mucothiol with Promethazine syrup is indicated for the adjunctive therapy of respiratory tract disorders characterised by excessive  viscous mucus and allergic reactions associated with nausea/vomiting, including chronic obstructive airways disease.

Mucothiol with promethazine is contraindicated for use in children less than 2 years age.

Mucothiol with Promethazine  is not recommended during  pregnancy.

Use in lactation:
Available evidence suggests that the amount excreted in milk of both Carbocisteine and Promethazine is insignificant. However, there are risks of neonatal irritability and excitement seen with Promethazine.

The product may potentiate the effects of alcohol and other central nervous system depressants.
Many psychotropic and anti-histamine drugs are of the phenothiazine group, and a combination of both may lead to toxicity. Potentiation of action may also occur with monoamine oxidase inhibitors and analgesics.
Antihypertensive therapy used concurrently may need adjustment of dosage to avoid hypotension, particularly in the elderly.
Promethazine may interfere with immunological urine pregnancy tests.

Should be avoided in children and in adolescents with signs and symptoms suggestive of Reye’s Syndrome. Should not be used for longer than 7 days without seeking medical advice. Mucothiol with Promethazine should only be used cautiously in epileptic patients, since central nervous stimulation may sometimes occur

Storage:
Do not store above  30⁰C.  Store in a dry place. Protect from direct sunlight. Keep out of reach of children